I Wish I Could Have Seen It 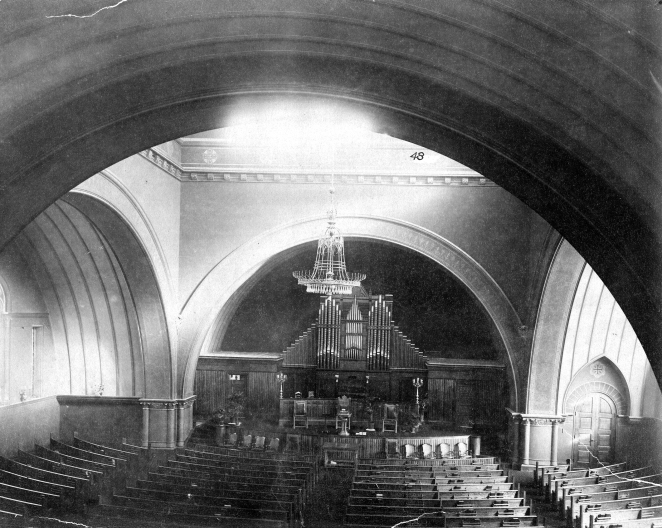 A new friend, after seeing my book Evidence of Things Not Seen about the church’s architecture and Christian symbolism, remarked, “I wish I had been able to see Shadyside Church’s sanctuary before the 1938 remodeling.”  I share his sentiment which spurred me to new thinking and visualization of how it must have looked and felt. (Book available from church office (412) 682-4300). 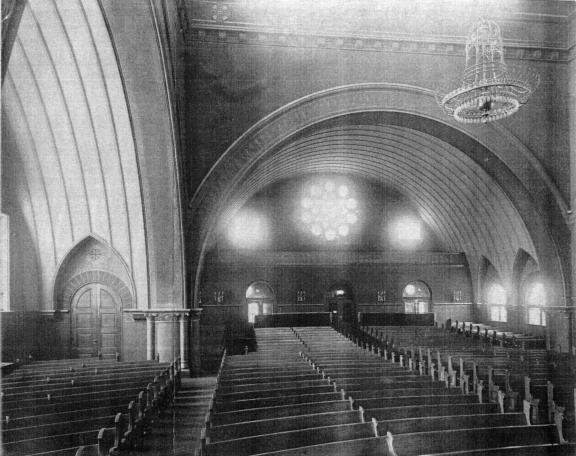 I realize that my imagination has been limited by the fact that we do not have color photos of the worship space from its first half-century. I usually picture the pre-1938 sanctuary in black and white!  We do, however, have some clues to its appearance.  The architects, Shepley, Rutan & Coolidge, described their proposed interior as designed “…to create a harmonious whole with encaustic color, which gives a soft and pleasing tone.”  Encaustic is a painting technique in which pigment is mixed into wax and heated after application.  Geometric pattern stenciling enlivened the plastered walls.

What colors constitute a soft and pleasing tone? We may look to Boston’s Trinity Church, the conception of Henry Hobson Richardson, mentor to Shadyside’s architects.  While the plan and massing of Shadyside derived from Trinity, it seems unlikely that the Pittsburgh Presbyterians wanted the vivid hues of the Boston church’s interior.  Richardson himself characterized Trinity as “a color church.” 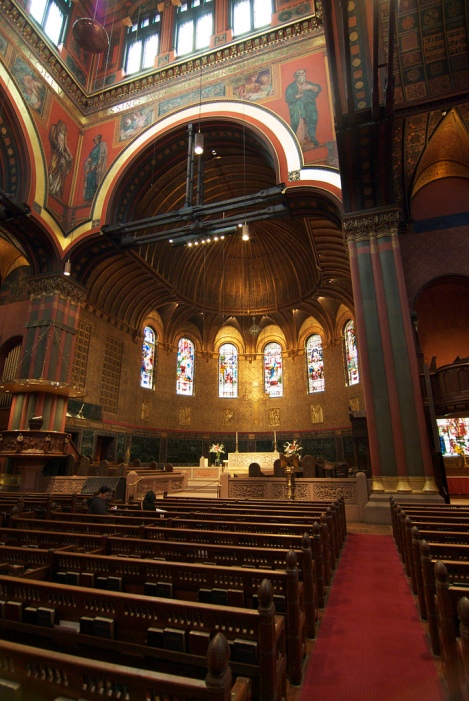 A near-contemporary of Shadyside, Detroit’s First Presbyterian Church was built on the same central tower-auditorium model. That building, now part of Ecumenical Theological Seminary, has preserved its original interior.  It points to what may well have been Shadyside’s ambiance. 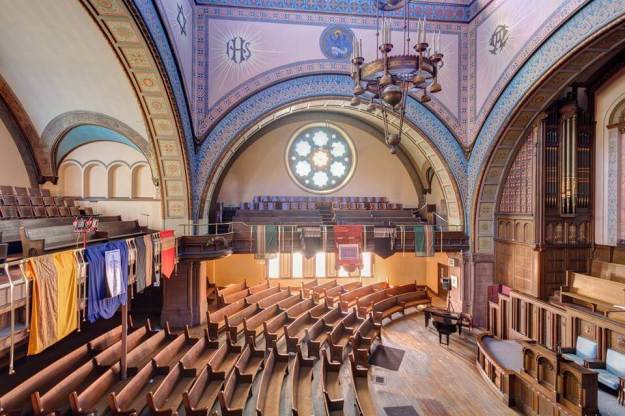 Other than the wall treatment, Shadyside had two pre-1938 interiors. In 1890, a somewhat spare preaching platform incorporated the Hook & Hastings organ from the 1873 building (see photo, top).  A modest “preaching lectern” held the sermon notes or text.  Some commenters point out that this typical 19th century Protestant arrangement allowed the preacher to move about the platform as he spoke.  Concern grew that attention might be drawn to the preacher rather than to the proclamation of the Word. 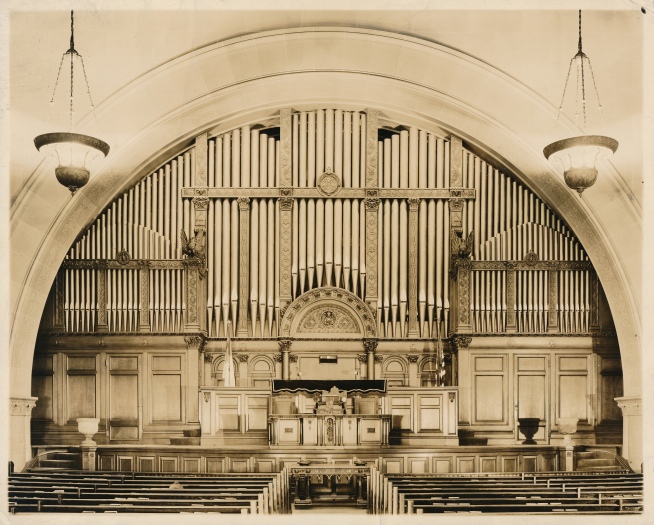 Whether or not Shadyside’s congregation felt that concern, a major remodeling of the platform accompanied the installation of a new W. W. Kimball Company organ in 1904. An ample preaching desk anchored the platform and may have encouraged a preacher to “stay put” during the sermon. 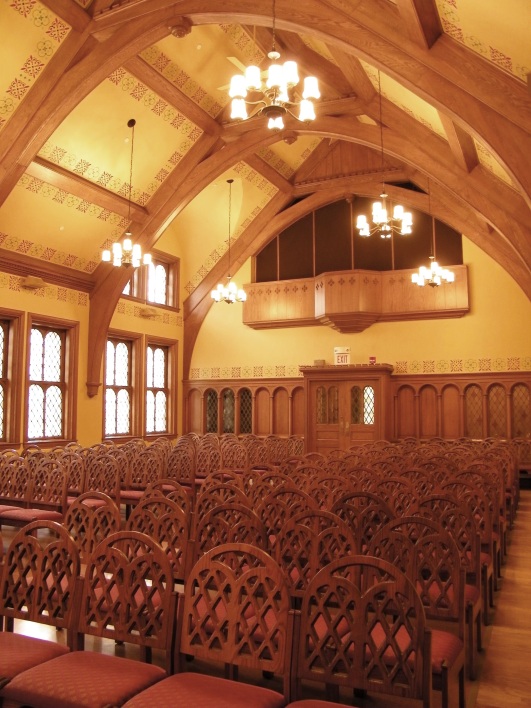 Today, Shadysiders may get a direct impression of the color environment inside the original worship space. During renovations and additions implemented with the “Building Community” campaign, the congregation undertook a thorough remodeling of the 1950’s Chapel.  For this space, a careful study yielded a color and stencil scheme believed to reflect those in the church’s 1890 sanctuary.  Some question must remain (unless documentation turns up) on the exact decorative plan in Pittsburgh’s smoky air, for a building equipped to accommodate both gas and electrical lighting. 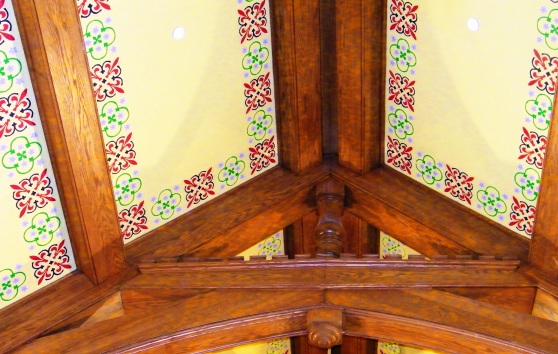 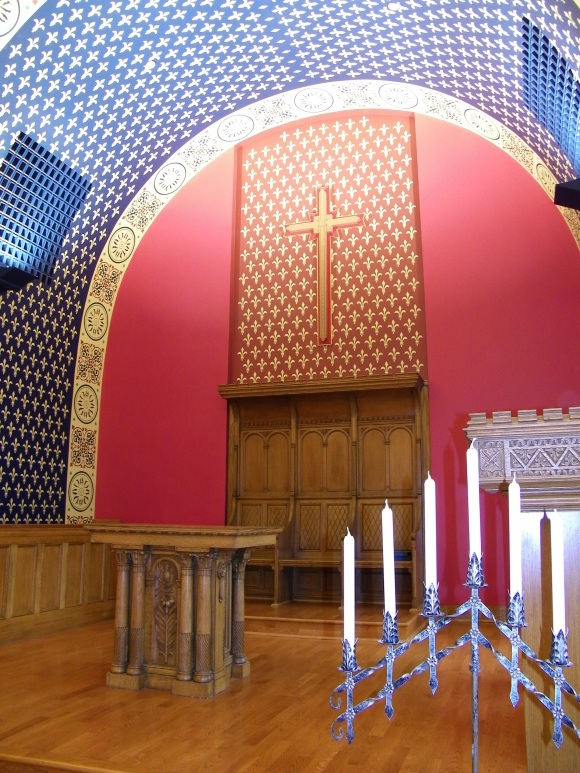 Inside the 2010 version of Shadyside’s Chapel, one finds another echo of the pre-1938 main sanctuary. A small communion table stands in the chancel.  Careful examination reveals it to have been constructed from the 1904 preaching desk.