This is one in a series of posts on the four main liturgical furnishings at Shadyside: the pulpit, the table, the lectern and the font.

In the 1937-38 sanctuary remodel at Shadyside Church, the symbolic role of the pulpit underwent major change. In 1890 the original liturgical focus of the auditorium-sanctuary was the combination of two liturgical centers:  a central pulpit on a raised platform, on axis with the communion table located at the foot of the platform.  In the remodel, each retained their importance while moving to different focal centers. 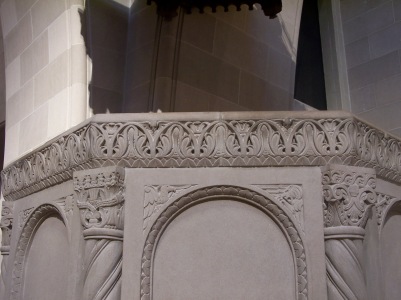 In moving to the north side of the chancel, the pulpit became more substantial in size, reaffirming the high place of preaching in the church, while emphasizing the distinct and complementary roles of Word and Sacrament in Christian worship. Tradition has it that the north location symbolizes the protection of the Word Proclaimed against medieval barbarians.

Colloquially called the “preacher snuffer”, the structure above the pulpit is more conventionally known as a sounding board. Before the twentieth century, sounding boards were to reflect the preacher’s voice to improve acoustics.  At Shadyside, its role is visual, helping define and emphasize the space set apart for proclaiming God’s Word.  Preaching only from the pulpit acknowledges the risk of calling personal attention to the preacher rather than the proclamation.  Many ministers today are willing to take that risk in an effort to preach more intimately.  At Shadyside, both the spirit and the architecture discourage such forays. 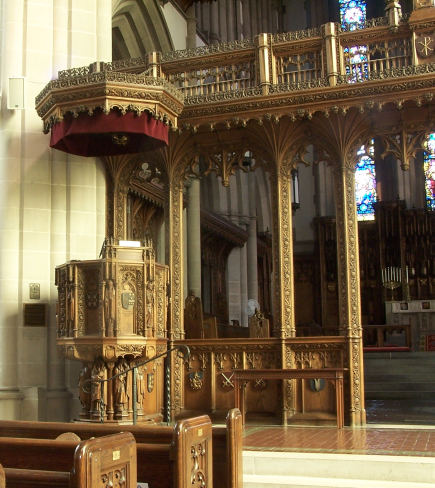 Admittedly, it is not only a modern practice. Hugh Thomson Kerr, Shadyside’s fifth pastor, notes (in his book Preaching in the Early Church) that in the fourth century, John Chrysostom “…spoke often from the ambo or pulpit, but frequently came down to the reader’s desk among the people.”  This was not to get attention for himself, but to get attention at all.  Dr. Kerr points out, “It was not easy to preach in those days.  People were restless and the congregation seemed always on the move…Some left before or in the midst of the sermon.  Some gossiped at the back of the of the church…”  Surely, this was not a problem for Dr. Kerr, who doubtless had considerable influence on the design of Shadyside’s pulpit, installed during his pastorate.

The detailing of the pulpit was just as carefully designed as the size, shape and location. Carved symbols in the limestone “barrel” and wooden sounding board speak of the many ways our lives can be lived in Christ.

James F. White, the prolific writer on architecture for worship claims, “…the whole story of the incarnation is that of God entering history in the person of a man. And that incarnation continues every time the preacher goes into the pulpit and his words become the vehicle of God’s Eternal Word.  The sermon becomes a means by which God’s saving power is made contemporary to every hearer.  In this sense the pulpit has a very sacred function.  It is not a stand provided for a bit of oratory but veritably the throne of the Word of God.”  (From Protestant Worship and Church Architecture) 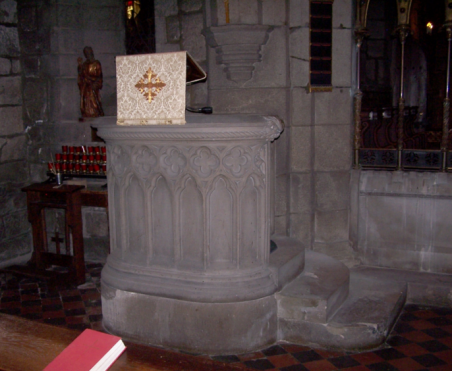 If we trace back the Christian use of a pulpit for preaching the Word, we do not make it back to the time of Christ. Indeed, in the case of Jesus, we find in Luke 4:

As was his custom, he went into the synagogue on the Sabbath day. When he stood up to read, the scroll of the prophet Isaiah was handed to him. Unrolling the scroll, he found the place where it was written,

“The Spirit of the Lord is upon me; he has anointed me to tell the good news to the poor.  He has sent me to announce release to the prisoners and recovery of sight to the blind, to set oppressed people free, and to announce the year of the Lord’s favor.”

Then he rolled up the scroll, gave it back to the attendant, and sat down. The eyes of everyone in the synagogue were fixed on him. Then he began to say to them, “Today this Scripture has been fulfilled, as you’ve heard it read aloud.”

In Jewish custom, one stood to read the scriptures, and sat to teach from them. Certainly, teaching and preaching are not synonymous.  In this case, however, since Jesus is the Word of God, we may assume that his teaching was, in fact, proclamation of the Word.  In fact, the scripture he reads and claims to embody speaks of an anointing to proclamation, “…to tell the good news…to announce release to the prisoners…to announce the year of the Lord’s favor.”

The Old Testament book of Nehemiah says that the priest, Ezra, “…stood upon a pulpit of wood, which they had made for the purpose,” according to the King James Version. This is not likely a structure arranged for a single speaker, as we commonly picture a pulpit, because thirteen others stood beside Ezra.  Other translations describe the structure as a platform or podium.

“So they read in the book in the law of God distinctly, and gave the sense, and caused them to understand the reading.”  Was this preaching?  The reaction of the people indicates it was, for they wept, and later rejoiced when Ezra and Nehemiah declared to them “neither be ye sorry; for the joy of the LORD is your strength.”

Some four hundred years later, though, Jesus sat to explicate the scriptures. This custom seems to have carried into the earliest structures that were used (occasionally or exclusively) for Christian worship:  homes.   These homes typically had a seat of honor at a table, a natural place from which a Disciple, apostle or prophet would preach.

As congregations grew, a model for their churches was the basilica. It was a Roman civic building with a raised platform at one end of a long room. Upon the platform, a seat of authority (e.g., for a judge) was chosen by churches as an appropriate location for preaching.  It became the cathedra, the bishop’s chair.  The Roman basilica sometimes had one or more extension of the platform into the long room.  Advocates of an issue spoke from these places, called ambos.  Christians adopted the ambo for reading of scripture.  This practice may have grown out of the Jewish use of a bimah (raised platform) for scripture reading in the synagogues and in the Women’s Court of the Temple.  Later, perhaps as a practical acoustical consideration, the ambo was also used for preaching. 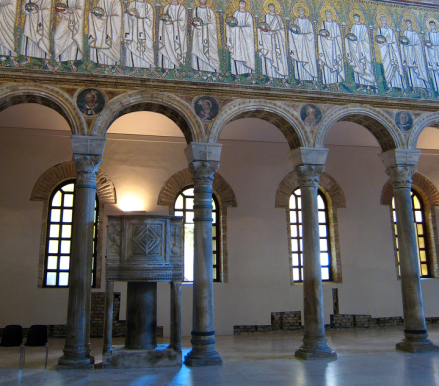 In the earliest churches, separate rooms were used for the various components of worship.  At first, catechumens and later the laity were excluded from the room (the chancel or choir) in which the priests celebrated the mass.   The ambo platform in the nave (where the congregation worshiped) became elevated for visibility and hearing the preacher.  Perhaps as a matter of safety, eventually a railing enclosed the platform.  Pulpits became progressively elevated, not only for the benefit of those on the nave floor, but for those in the galleries. 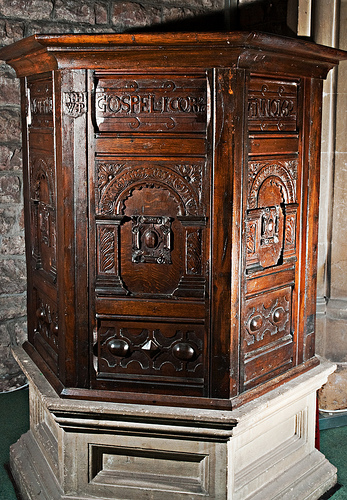 According to Richard Kieckherer, “Around the twelfth century, the relatively small ambo can sometimes be distinguished from the more massive and often elaborately carved pulpit…Pulpits became more common in the thirteenth and following centuries, when preaching was increasingly important…” (Theology in Stone)  The pulpit placement was sometimes a significant distance from the chancel.  If the church included side aisles, the pulpit might mount on one of the columns.  Seating was not provided in church naves before the fourteenth century, so the congregation was free to move to the appropriate liturgical center.  When pews came into use, columns often obstructed line of sight to the pulpit and chancel.

As the pulpit increasingly became the architectural focus in churches, other liturgical functions migrated to it. “Triple Decker” pulpits, had a reading desk below the preaching position to conduct other parts of worship, and a clerk’s table below the desk.  In many meetinghouse churches, the baptismal font became a bowl that appeared on a shelf of the pulpit, only when that sacrament was celebrated.  In some cases, even the communion table became a mere extension of the pulpit.

This unifying trend was countered by Christopher Wren’s seventeenth century London churches.  He designed for visibility and hearing of the laity but the pulpit, font and altar table each reclaimed distinct locations.  This was not nearly enough for the nineteenth century English Ecclesiologists, who demanded a return to medieval worship and architecture.  For their adherents, worship reverted to a pattern of clergy in the chancel, congregation in the nave, separated by a screen.  The pulpit usually was located at the division between the rooms.

For the past 150 years, churches have chosen from among all the preaching positions described here, except the bishop’s seat. For a time, Protestant churches, where preaching became the nearly exclusive focus of worship, had their pastors speak from what is accurately described as a stage.  In some cases, a massive central pulpit was installed.  In others, the pulpit shrank to lectern size and in some cases became merely a stand to hold the minister’s notes.  By the late twentieth century, contemporary worship came to be led from what literally is a stage.  The last vestige of the pulpit, the note stand disappeared into the teleprompter.  Perhaps it would be not unfamiliar to Ezra, who preached from a platform, seemingly without notes.

However, in the face of these changes, formal, reverential, Reformed worship never died out and in fact is enjoying renewed appreciation. At Shadyside, where honoring God through excellence in this form of liturgy is the tradition, the pulpit – beloved of pastors and parishioners alike – seems the best and only place from which to preach Jesus Christ, the Word of God.  Learn about The Lectern.