Ask a first-time visitor to Shadyside about the biggest surprise in our worship space, and the response likely will be our mosaic of the Transfigured Christ.  Many are taken with its sheer beauty.   Some think it unusual for a Presbyterian church.  A few express concern about an image of Christ in a church squarely in the Reformed tradition. These same would probably mention the prevalent use of explicit symbolism throughout the nave and chancel.

The use of symbols and images in worship is commended by their teaching (or, perhaps, reminding) value.  Those who express concern might do so because of the temptation to worship the image or symbol – idolatry in its rudimentary form.  The planners of the 1937 sanctuary remodeling showed confidence in the maturity of worshippers here to learn and be inspired, rather than to fall into adoration of objects. 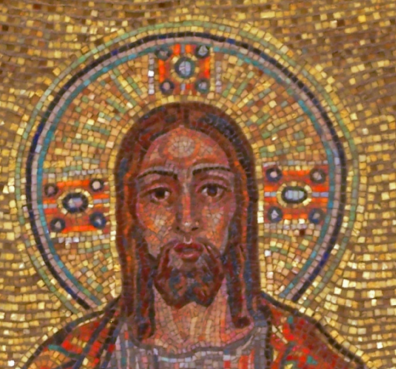 Close inspection of German artist Rudolph Scheffler’s tilework reveals many instructive symbols.  Those at Shadyside who have studied the mosaic conclude that Christ is depicted at the Transfiguration.  An Ascendant Christ is not believed to be the subject, since there are no wounds of the Crucifixion seen on his hands and feet. The stunning beauty itself point to  the Transfiguration story, “His face shone like the sun, and his clothes became as white as the light.”   The halo-like object is called a nimbus, traditionally indicating holiness.  This one has three rays within it, a tri-radiant nimbus, reserved exclusively for the Triune God.  In fact, within each ray of the nimbus, there is an oval surrounded by four circles. There is a reference to a jeweled nimbus in Church Symbolism by F R Weber and Ralph Adams Cram.  Like a jeweled crown, this represents the highest majesty and therefore is used only in connection with the Deity.  Having thus identified Jesus, Scheffler depicts his hands in the gesture of blessing.

The Gospel accounts tell of a surrounding cloud, from which the Father spoke.  In the mosaic, the cloud rolls back into ten “cloudlets,” recalling the Ten Commandments, the Law. Moses was at the Transfiguration, representing the Law.  If this reading is correct, by a principle of parallelism, we should find reference to the Prophets through Elijah, also present at the Transfiguration. A common symbol for Elijah is a red vestment, an allusion to his ascent to Heaven of a fiery chariot. Does Scheffler suggest Eliljah by giving a reddish cast to the cloak Jesus wears?

Twelve stars array around Jesus, a number with many associations (the apostles, the tribes of Israel, the Minor Prophets).  It can certainly symbolize the disciples, three of whom were with Jesus on the mountain.  Doubtless, this does not exhaust the mosaic’s symbolism.  The Byzantine inspiration of the mosaic is coherent with our architecture. Rome and Byzantium were primary influences on the Romanesque.

Perhaps the composition as a whole should remind us of two divine benedictions at the Transfiguration:  The Father’s loving instruction, “This is my Son, whom I love…Listen to him!” The Son’s pastoral encouragement, “Get up…Don’t be afraid.”