This is one of a series of four posts on Shadyside’s liturgical furnishings.

The Lord’s Supper. Holy Communion.  The Eucharist.  The meaning and nature of this sacrament divided the Sixteenth Century Reformers from the Roman Catholic Church.  Further, understandings  of the Lord’s Supper varied enough among the Reformers to divide the movement into separate denominations.  It is no surprise, then, that the liturgical center associated with this sacrament is subject to so many interpretations.

An altar is used in Catholic liturgy and Christ’s sacrifice is central to their celebration of the sacrament. Protestants are uncomfortable with an act that appears to repeat the sacrifice.  Reformed belief holds that the sacrifice was made once for all at the Crucifixion.  Any repetition implies that it was insufficient.  A somewhat nuanced view of Catholic theology is that there was one sacrifice, but that the benefits are experienced by the faithful each time they participate in the Eucharist. 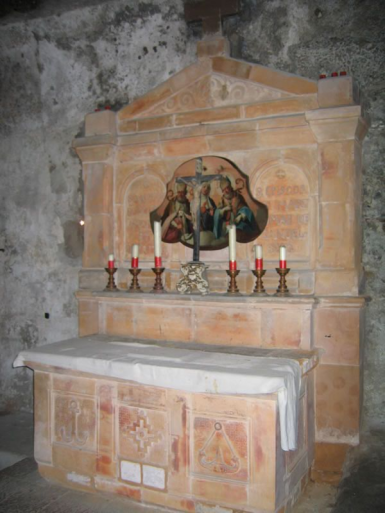 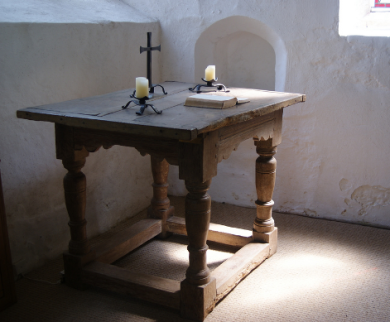 Some sources indicate that Catholic doctrine characterizes the Eucharist as both sacrifice and meal. However, Pope Benedict XI rejected the Reformed singular focus on The Lord’s Supper. Writing as Joseph Cardinal Ratzinger in The Spirit of the Liturgy (2000), he claimed,

“…the Eucharist that Christians celebrate really cannot adequately be described by the term “meal”. True, the Lord established the new reality of Christian worship within the framework of a Jewish (Passover) meal, but it was precisely this new reality, not the meal as such, that he commanded us to repeat.”

For the Presbyterian view of the Communion Table and its use in the sacrament, we do well in turning to the Reverend Dr. John Dalles. He is Pastor of Wekiva Presbyterian Church (Longwood, FL), a prolific hymn writer, a student of worship and its setting, who has additional credentials as a trained architect.  A native of Pittsburgh, Dr. Dalles is also a long time friend of Shadyside  Church  .

“The Table (sometimes called The Communion Table or The Lord’s Table), is the place of the ministry of the Sacrament of The Lord’s Supper. The table symbolizes the ongoing spiritual presence and care that Christians receive from and in our Lord Jesus Christ.  The table is our reminder of the Lord’s Supper, which both commemorates the Last Supper and is a foreshadowing of the great heavenly banquet Jesus proclaims.  It is important to note that during the Reformation which brought about the Presbyterian denomination, the Reformers insisted that a simple table replace what had been the altar.  It was called the “Table of the Lord” to make the immediate connection with the table in the Last Supper, and to distinguish it from the concept of a sacrificial altar.  Because of its symbolism, the table is to be present even when it is not a communion Sunday, and even if the sanctuary is not being used for worship.”

“Our Communion Table at Wekiva Presbyterian Church is part of a redesigned Chancel, completed several years ago. All of the Chancel furniture is made of oak, based upon an organic design that incorporates variations on the cross in the supporting members.  The table, as well as the font and pulpit, were custom made by a  Central Florida artisan, and were the gift of church members Michael and Deborah Owen.  The choir rail and supplemental Chancel furniture (including the stands for the flowers as well as our Christ Candle) were made by our own members, to a design in keeping with the pulpit, font and table, by church member Bruce Rogers.  He completed these with a group of volunteer helpers (including my wife Judy).  The new Chancel area remains in keeping with the late 20th century architecture of the Sanctuary, yet has a stronger symbolic and artistic presence than what preceded it.”

Part of the symbolism adopted by some Reformed churches was to use a liturgical center that looks like a table. This includes such attributes as construction of wood and an open design under the tabletop, so that it would be possible to be seated at the table.  (This distinguished it from an altar, which is typically stone and may contain relics in a closed space under the tabletop.)  The table’s location in the worship space was to be close to the congregation:  between the pulpit and the pews, like the table described by Dr. Dalles.

Until 1938, the table used at Shadyside Church conformed to these qualifications. In the sanctuary remodeling of that year, the present Communion Table was installed.  It is made of marble and is not open under the tabletop.  Visible at the front are four columns supporting the tabletop.  This gives the impression that, although closed, it is not a reliquary.  We find it in a semi-circular apse at the Eastern end of the chancel.  It would be hard to deny that Shadyside has a very “altar-y looking” Communion Table!

However, its use is emphatically as the Lord’s Table. The pastors assemble behind it, facing the congregation to break the bread and fill the cup.  A pastor offers the elements to all those assembled, often saying, “These are the gifts of God, for you, the people of God.”  The church’s elders (ordain laypersons) serve the bread and cup to the pastors (seated behind the Table) and the congregation in the pews.  This reinforces the sense that through this meal, they are in communion with the Risen Christ, with each other and with Christians of all time and every place.  All those receiving the elements are gathered around the table (somewhat more than symbolically) for the communal meal.

Like all of the liturgical furnishings at Shadyside, the Communion Table is carved with explicit Christian symbolism. On the central panel is a raised carving of the Agnus Dei, the Lamb of God, Jesus Christ.  A banner signifies that through his crucifixion and resurrection, he has defeated death – a victory he shares with us through his invitation to commune with him.  This symbolism reminds us that the sacrament is more than a commemoration.  It is a means of grace that gives us evidence of our connection to Christ.

And so, we have examples of two ways expressing and symbolizing the sacrament: At Wekiva, a traditional open, wooden table, reinterpreted in fresh proportions and forms that are, at once, spare and elegant.  At Shadyside, a table of a design that recalls the ancient origins of the sacrament while facilitating Reformed practice which seeks to recover the ancient meanings of Communion.  A third example combines the simple, wooden table model with intentional expression of Christian symbolism.  Hampton Presbyterian Church is congregation in the North Hills of Pittsburgh,  PA.

Beginning in the Fall of 2008, the Rev. Dr. Ted Martin (Pastor) and Bill Haberlein (congregation member) began a labor of love constructing a communion table that would reflect the depth of God’s love for His people. Built into the table are several layers of symbolic representation and correlation to the sanctuary.

The primary wood is cherry, a domestic hardwood native to Western Pennsylvania. The particular wood of this table comes directly from the backyard of one of Bill’s friends.  The cherry will darken to a deep red hue reminding us all of the blood sacrifice that Jesus made upon the cross for our sakes.

The tabletop is made of 10 boards; each board represents one of the Ten Commandments. The boards are fastened together with biscuit joiners.  The number used is as follows: 7, 5, 3, seven for the days of creation, five for the Pentateuch, three for the Trinity.  The shape of the top is an oval.  There is no head or foot to this table, because when we gather around the Lord’s Table, we are all one in Christ with equal stature.

Embedded as an inlay central to the tabletop is a traditional symbol of the Trinity: three interlocking circles.  The materials are hard maple (for the purity of Jesus Christ) and Walnut (a precious hardwood that distinguishes the symbol of the fish).  In Greek, the word for fish results when the acrostic “Jesus Christ, God’s Son, Savior” is spelled out.  This symbol, used during the time of Roman persecution, indicated the location of the church body. Here, it points to the people gathered in the sanctuary.

The legs of the table are designed to match the architectural structure of the cruck beams in the sanctuary. These beams recall the hull of a ship, long a symbol of the Church.  When viewed straight-on, the legs form an “X” or “Chi, the first letter in the Greek word for Christ. The pedestal that connects to the tabletop forms “T”; a reminder of the cross that Jesus hung upon to redeem us from sin.  At the bottom of the pedestal is a tear drop for the tears Jesus shed in the garden.  Each leg has pairs of buttons at the attachment point to the pedestal.  Two buttons represent the Law and the Prophets.  Jesus came to fulfill all that was written in the Law and the Prophets.

The designs here do not begin to exhaust the possibilities for the Lord’s Table in the Reformed tradition. The range would be even wider if we were to examine those denominations who see Communion as merely a remembrance or those, such as the Baptists, who do not consider it to be a sacrament.  The three Presbyterian tables here do show the same high regard for worship in Word and sacrament demonstrated by the Reverend Dr. Hugh Thomson Kerr, long time pastor of Shadyside Church.  He presided over the 1938 sanctuary remodeling that gave such a prominent place and exquisite execution to Shadyside’s Communion Table.  Five years earlier, he and the leaders of his church instituted Worldwide Communion Sunday.  Nearly eight decades later, it continues to be celebrated widely on the first Sunday in October.  The Hampton Presbyterian Table was first used in worship on World Communion Sunday, October 2, 2011.  Learn about The Pulpit.