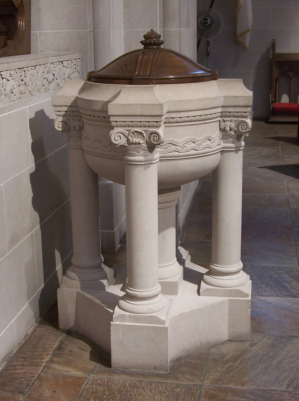 This post is one of four covering the principal worship centers.  There is ample carved symbolism on Shadyside’s baptismal font. On a more fundamental level, the presence of a prominent baptismal font in the nave is, in itself, symbolic.  Few photographs of the church’s sanctuary from before 1937 exist.  The presence of a free-standing font or a bowl is not apparent in them.  A prominent, substantial font may signal the choice to place more emphasis on the sacraments, or perhaps, an urging to do so.

We know that Hugh Thomson Kerr held a high view of the sacraments. As Shadyside’s Pastor, he initiated “Worldwide Communion Sunday” in 1933 – shortly before the 1937 remodeling.  Shortly thereafter, his book “The Christian Sacraments” was published in 1944.  In it he makes this claim for the two sacraments observed in Protestant tradition.

God makes use of common things to manifest his grace to men…Before the Gospels were written, before the Epistles were penned, before the conversion of Paul or the gathering in of the Gentiles, the early Christians were celebrating the sacraments, and the testimony of history is to the fact that there has never been a week, perhaps not a day, since Pentecost that the sacraments have not witnessed to the Christian faith. 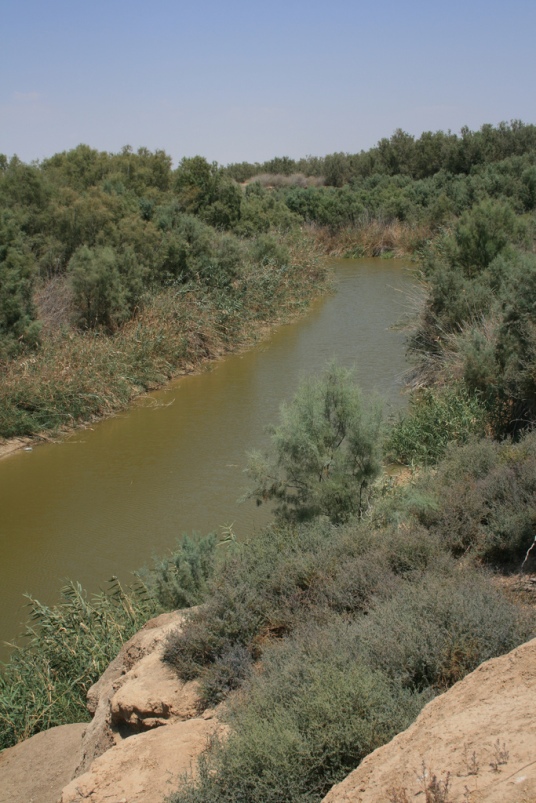 For a practice this old, it is not surprising that there have been variations in and controversy over the means of administration of baptism.  Christ’s own baptism took place in the flowing waters of the River Jordon.  There are those who hold that Christian baptism must be by immersion in flowing water.  There is evidence, however, that church leaders gave permission, if not encouragement, for other means.  In the Didache, a very early church document, we find: 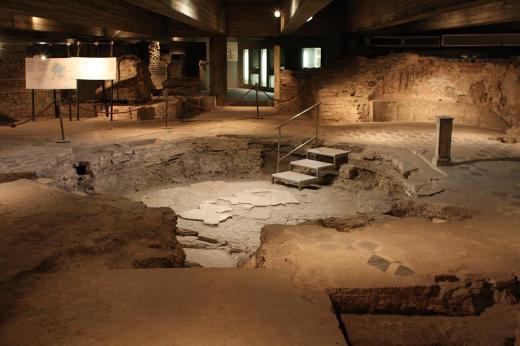 There are so many disagreements as to location, method, qualification and meaning of baptism that we cannot even attempt to catalogue them here. As for the font, the earliest were large enough (pools, really)  for immersion of an adult.  Later, apparently, smaller fonts for immersion of infants were used.  These became very common by the 800s, when infant baptism became the widespread practice.  Fonts like Shadyside’s, a vessel permanently mounted on a pedestal, apparently came into common use in Medieval England. 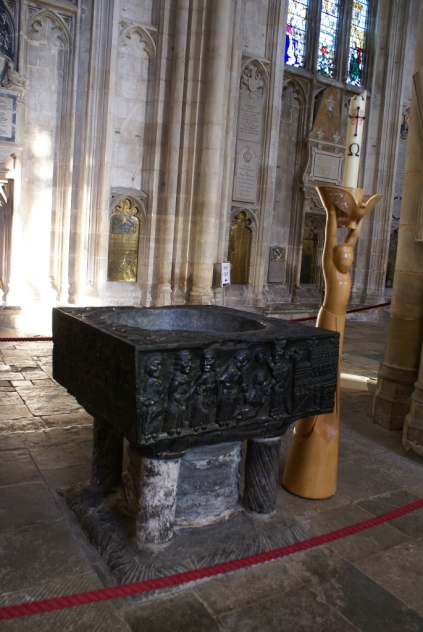 Many fonts are eight sided, a form to which Shadyside’s base conforms. There is a reference to eight being the symbol of new life:  Christ was resurrected on the “eighth day of Holy Week,” counting from Palm Sunday.  Baptism’s connection is to the cleansing from sin to a new life, associating the Christian with Christ in his death, burial and resurrection. 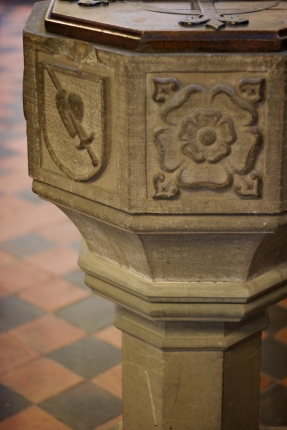 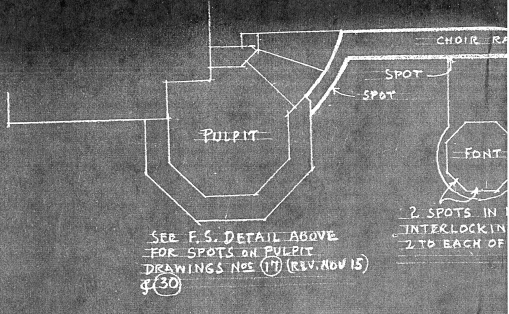 There are a number of placements for the baptismal font, in the various church traditions. For example, in the Anglican churches, the font is often located at the entrance to and within the nave – associating baptism with joining the church.  In Roman Catholic churches, baptism is sometimes (though not necessarily) a private ceremony.  The font may be placed in a side chapel or in the narthex.  In the Reformed tradition, baptism is a corporate act of the whole church.  This usually means the font is near the front of the sanctuary, in plain view of the congregation.  This is the case at Shadyside Church.  An early arrangement had the font near the Pulpit – but it was moved across the chancel, perhaps for balance.

While many Presbyterian churches use a font as simple as a small silver bowl, Shadyside’s Font is substantial in size and replete with carved symbolism. The modest bowl was adopted by the Puritans who considered an elaborate font “too Romish.”  Our Font was custom designed for Shadyside by Charles Marcus Osborn, during the sanctuary remodeling in 1938.  Below is a detail from the full size drawing made by Osborn to instruct the stone carver.  It is done in pencil on tracing paper (a thin, semi-transparent medium just a little heavier that tissue).  The church is fortunate that this and other fragile drawings by Osborn have been preserved.  The depiction uses a combination of measured, ruled lines and freehand treatment. 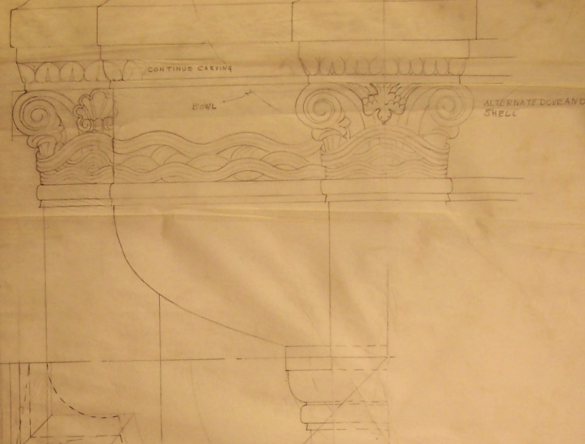 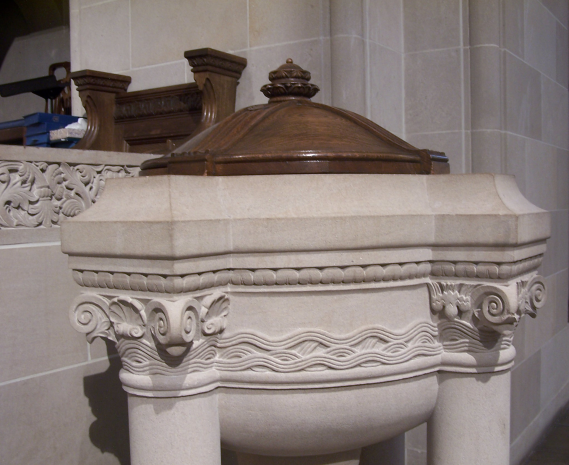 The wave-like pattern is a clear reference to the baptismal waters, even the waters of the Jordan where John baptized Christ. The shell motif is a common baptismal symbol for its use in pouring.  The descending dove refers to the Holy Spirit which came down upon Christ. 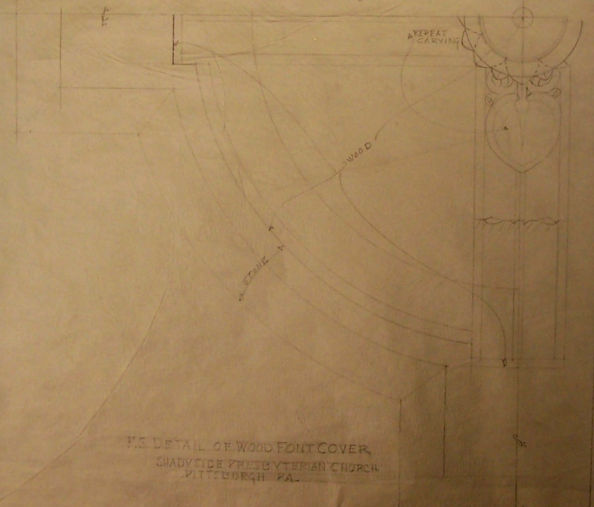 A case could be made for placing the Font on the central axis of the church at the foot of the chancel stairs.  Its association with resurrection would complete the crucifixion symbol of the Cross on the Communion Table.  However, traditions and the objections of brides may make this no more than an interesting discussion point.  Learn about The Table.