…A Cathedral to a Chicken Coop

“I will plan anything a man wants from a cathedral to a chicken coop.” Henry Hobson Richardson revealed to a client what his portfolio confirmed: a broad range of buildings including churches, civic and institutional buildings, offices, town homes, country homes, libraries and railroad stations.  Neither did his successors, Shepley, Rutan & Coolidge, limit their scope.  And although they built only three structures in  Pittsburgh  , the variety is great:  Freemasons’ Hall Downtown (not extant), Shadyside Presbyterian Church and the P&LE rail station in Coraopolis.  Work is underway to preserve and reuse this valuable community asset by Coraopolis Train Station Project.

It is a sign of Richardson’s genius that he is famous for his rail stations, when the first commission entered his office in 1881, just five years before his death.  Commuter rail stations were one of the most important building types in the late nineteenth century.  The railroads courted regular travelers from new suburbs with practical shelter, comfortable and handsome surroundings and, in many instances, elaborate landscaping.  The term commuter stems from the practice of discounting fares for frequent patrons:  their ticket prices were “commuted” to a lower rate.

Pittsburgh ’s pattern of residential building moved from the downtown area, to Allegheny  City (the North Side), to the East End and finally down the  Ohio River.  Summer homes were built in Sewickley, eventually used year-round.  The Pittsburgh & Lake Erie line had service on the opposite side of the  Ohio that reached to Youngstown.  They commissioned Shepley, Rutan & Coolidge to design an attractive station at Coraopolis in 1895, five years after Shadyside  Church. (The firm designed three stations for P&LE.)

Richardson and his contemporaries pioneered the use of broad, low, hip-roofed structures, usually with long covered waiting areas at trackside. Often, the stationmaster needed visibility up and down the tracks.  This was provided two ways:  a bumped-out bay with observation windows or a tower.  Coraopolis employed both.  The lower tower formed the bump-out and, as early photos show bricked-in upper windows, whether it was used for observation is uncertain.  The tower is a quotation from Shepley, Rutan & Coolidge’s Shadyside Presbyterian lantern.  The proportions, round-arch windows with stone voissoirs, sharply incised square windows and “sprung” slate roof are immediately familiar to those who know the church.  (A sprung roof has an outward curvature or shallower slope at the lower edge.)

The station displays an unusual masonry treatment. An ample brown-tan sandstone water table is “battered”, enhancing the organic grounded sense of the structure.  The main walls are brick, but of unusual proportion.  They are Roman bricks which measure 2” x 4” x 12” in contrast to common brick at 2” x 4” x 8.”  Red mortar offsets the buff-colored brick.  Windows and door arches (round and flat) are sandstone.  The arches and stringcourses match the water table stone.  The polychromy of the Coraopolis station distinguishes it from the firm’s other  Pittsburgh  buildings. 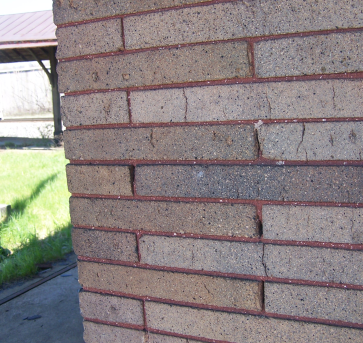 The installation emphasized convenience and shelter with a port-cochere extending from the street side of the building. This feature has an Arts-and-Crafts feel, with the sloping water table section of the columns and extended, embellished wood rafters.  Tudor references emerge in the flat pointed arches and half timbered gable.

Polychromy continues on the broad hip roof, with red cap tiles at the ridge of the gray-black slate planes. The tower sprung roof is echoed here in the broad overhang covering the walkways.  Further picturesque roof touches include an eyebrow window, deftly executed in slate, to admit light to the interior.  The skills imparted by  Richardson  to his successors find expression in a building that does not feel frenetic, even though it has so many architectural features packed into its small size.

Exploration of the station interior awaits a time when the sadly deteriorated building can be re-opened. After retiring from commuter service, it was used for storage and warehousing.  The Coraooplis Community Development Foundation has acquired the structure, which the National Register for Historic Places lists.  Plans are to return it to a community asset on a par with its life as a rail station.  Renovation is to accommodate a café, museum and community center.

And so, as Richardsonian Romanesque architecture suited a wide variety of building types, individual structures are used and adaptively re-used creatively. There are, however, no plans to designate any space as a chicken coop.