Sandstone. It doesn’t sound very durable.  Certainly, stone made from sand doesn’t seem like a material for a church that is expected to survive centuries.  But, there it is in the 1889 proposal specifications to Shadyside Presbyterian from the architect, Shepley Rutan & Coolidge: Beaver  County sandstone.

However, some of the applications for this variety of sandstone speak of its durability – government buildings, streets and many bridge piers around Pittsburgh use the stone.  Advertisements have been found for homes built of recycled Beaver County sandstone bridge piers.  There is a range of sandstone types of differing durability.  Some weather quickly.  Other types stand up well to the elements.  In general, sandstone is more easily carved than many kinds of rock.  In some technical texts,  Beaver County sandstone is known as Homewood sandstone, for the borough in the county where it is very abundant. 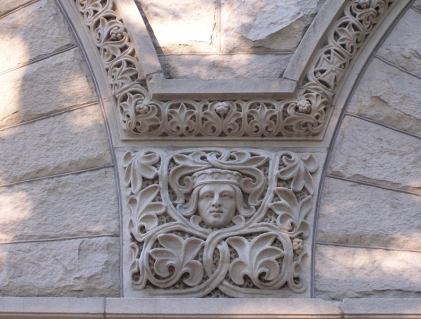 In 1891, the US Geological Survey published this description of Homewood sandstone:

“While usually quite hard, it generally splits well and makes excellent building stone, the blocks from it being almost indestructible. Although generally of a yellowish or buffish gray tinge, it occasionally consists of almost pure white quartz grains, and hence sometimes supplies glass sand of excellent quality.”

At the time of the church’s construction, there were a number of active sandstone quarries in Beaver County, Pennsylvania. We have not discovered from which quarry the stone was obtained. There were two well-established quarries operated by the Park family at Crowe’s Run, near  Conway and at New Galilee in Beaver County, starting in the early 1880s. The original main church building and the chapel (completed in 1890 and 1892, respectively) employed stone of a color that might be called “buff” or “putty.” 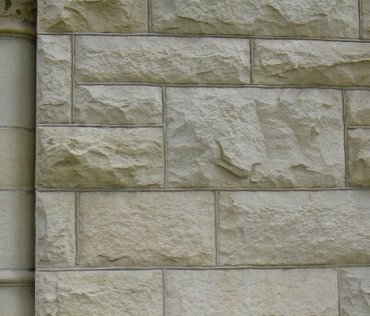 The church walls are laid up in random, quarry-faced ashlar. Ashlar is stone that has been squared and smoothed to ease laying. Quarry-faced indicates that the exposed surface is left rough, giving texture and shadowing/reflecting facets that add interest to a simple and monumental mass. Random signifies that rectangular blocks of various sizes are used, so that  no regular pattern results. 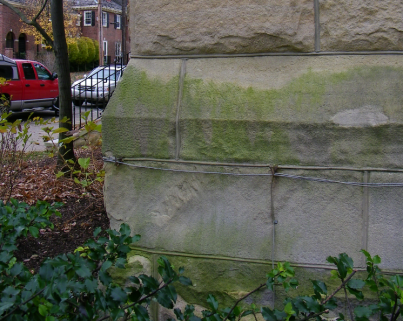 Uniform-sized, smooth-faced ashlar is used in some locations, such as the water table. This the transitional section between the main wall and the foundation, which slopes outward from top to bottom. The original function was to direct rain water washing down the wall away from the foundation, to avoid erosion. It is also a pleasing, subtle design feature, imparting an appearance of stability to the building. 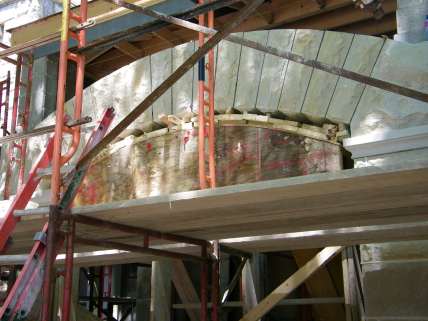 Shadyside Church’s Romanesque Revival style employs round arches at many door and window openings. Special wedge shaped blocks form the round arches as well as the segmental arches at the cloister and  new Westminster  entrance portico. These blocks are known as “voissoirs.” We saw that the ancient construction device of “falsework” was used on the portico. Wooden frames support the voissoirs until the arch is completed.

Since the dedication of the Chapel, Shadyside has undertaken five significant building campaigns. The first one extended the Chapel to the north in 1908. The stone work was matched well enough to the original that little evidence remains. Subsequent building projects presented difficulties in stone selection, resulting from the progressive soot-darkening of Pittsburgh’s industrial atmosphere.

Stone colors distinctly different from the original “putty” were used in the 1937-38 project. A round apse was added to the east wall of the sanctuary building. An office wing was built from the northeastern corner of the main building to the chapel, creating the courtyard which recently has been transformed into the Sharp Atrium. At the same time, windows were in-filled adjacent to the new apse and at the Pastor’s Study.

The new stone was of gray color and some of it contained rust -colored veins, both subtle and pronounced. In the apse and window work, these were mixed with stones from the original wall. This original stone must have already been gray or black with soot. (See photo at bottom of page) It is not clear what visual effect this mixture would have produced. On the office wing, mainly the new gray & shades of rust-color stones were used.

The mixing is apparent in a black and white photo from the 1960s. By this time, the 1937 stone work used to fill in windows had acquired some soot, although the skies were becoming cleaner. In the 1990s, the church stonework was chemically cleaned. Remarkably, after cleaning, the mixed stone sections blended well enough with the original walls that they were forgotten until they were noticed during construction of the Atrium. 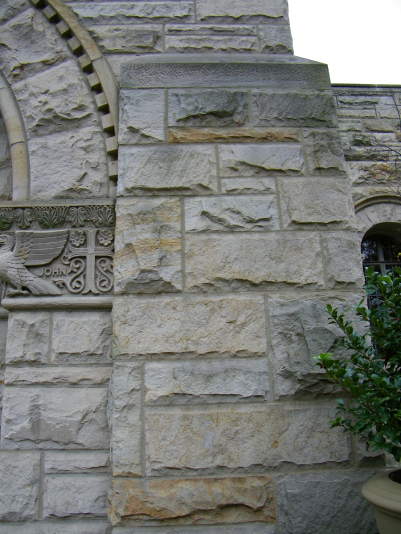 The Parish Hall was the next major addition, in the early 1950s. The mainly gray stonework includes of the rust hues. Perhaps the 1937-38 specifications were available and matched. In any case, this wing blends well with the rest of the complex, including the fields of solid putty color of the main building.

The early 1980s “North Porch” addition (the Scharfe Wing which encloses the Craig Room) must have presented special problems. Today, after cleaning has restored the original 1890 stone surface, the North Porch stands out because of its distinct monochromatic gray hue, contrasting with the putty color. People familiar with the construction of that addition recall that the stone was obtained “from the same quarry.” Perhaps that refers to the 1937 quarry from which the gray stone was taken. Because the church was nearly black by the 1980s, it may have been decided that only gray and none of the rust would be used on the extension for a better match. More research is needed to uncover whatever information is still available from all the additions, starting in 1937. 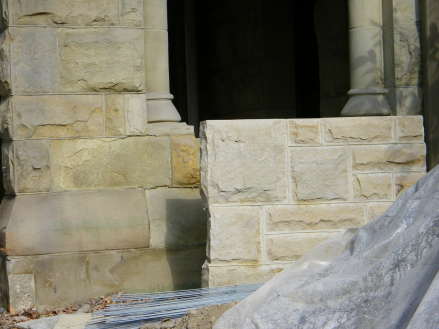 Sample stone panel from 2010 near Chapel

Although the cleaned surfaces eased the problem, a daunting and important task faced those charged with producing stone for the “Building Community” construction project.   The church’s Building Committee was very sensitive to preserving and honoring the original fabric of the historic structure.  They undertook, with  Celli-Flynn Brennan Architects and  Volpatt Construction of Pittsburgh to match the existing stonework.  We have seen that there was a wide variety of material to match.

M I Friday Mason Contractor of Pittsburgh and  Russell Stone Products of Grampian in Clearfield County,  Pennsylvania, were engaged to supply the stonework.  Russell Stone operates quarries in what is known as “Curwensville Stone” which includes Homewood sandstone.  Several large sample panels of stone were fabricated and brought to the church for evaluation of the match to adjacent walls under varying conditions of lighting and moisture.  The success of the ultimate selection is apparent and the masonry will doubtless weather to an even closer match.

In addition to the slight variation in stone, changes in building methods are detectible in Shadyside Church’s latest additions. In the original buildings, brick inner walls were used with the stone exterior.  This is visible in the view of the 1937 apse, where it was opened for the Atrium beam support.  Today, the interior construction is thicker concrete block.  As can be seen in the photo of the Westminster entrance during construction, thinner stone sections were used.  Even after completion, this fact is expressed at corners where the reduced stone thickness is apparent. 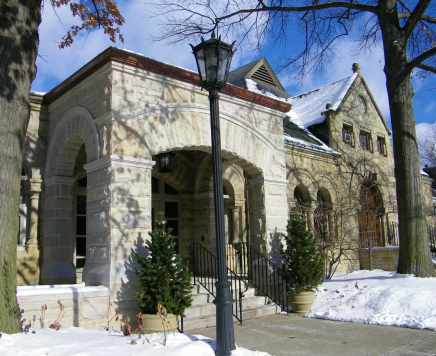 For all the emphasis here on matching stone, exact duplication is neither a requirement or necessarily desirable. Certainly, some cathedral building campaigns spanned several centuries.  Not only material, but construction techniques and even architectural style changed, and this can be discerned by the careful observer.  Construction sympathetic to existing structures and honesty in expression of building technique are desirable goals.  It is also helpful to maintain consistent stone sizes, surface texture and lay-up pattern.  We are fortunate that many generations at Shadyside Church have had the means and the wisdom to add to our historic church building in a harmonious way.