Almost all architecture, from Ancient times until seventy-five years ago, rewarded the observer who looked up. Interesting, often delightful details await there.  Our earliest skyscrapers often had decoration of a scale that could only be clearly observed with magnification from the ground or from a nearby high vantage point.

Shadyside Presbyterian offers many interesting features above, among them our “grotesques.” They exist at two levels on the lantern tower, below and above the clerestory windows.  In general, a grotesque is a fanciful carving of a face, animal or vegetation.  The earliest date from the Classical period, where, in addition to a decorative function, they may have served to ward off evil spirits.  The name has Latin roots, associated with decoration of caves or grottoes. 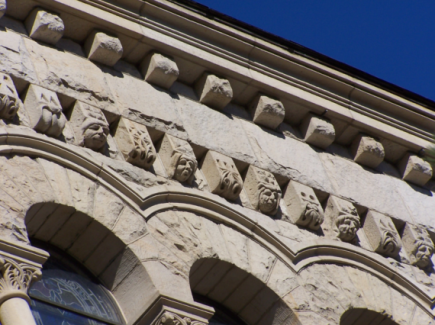 Rows of grotesque corbels above and below clerestory window

Medieval sculptors were often afforded freedom in the form of decoration they applied to monumental structures. The resulting carvings sometimes had symbolic significance and sometimes were caricatures of acquaintances.

Shadyside is an example of Romanesque Revival architecture (specifically the Richardsonian phase). While such structures drew many forms and features from buildings of  Western Europe of the eleventh and twelfth centuries, their conception was not slavishly archeological.  Although the cross-shaped, central tower form of Shadyside has many Romanesque (and pre-Romanesque) precedents, the large stained glass windows in the transepts would have been unusual in these sources. 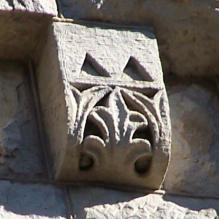 How, then, do our grotesques match up against Romanesque examples? First, while their form is a grotesque carving, their (nominal) function is as a corbel – a block-like support for a wall surface that projects beyond the surface below.  We find many Romanesque examples with the same form and function.  An examination of ours, however, reveals differences with Romanesque precedents.

Our grotesque faces are highly modeled and are more realistic looking than most Romanesque carving. To the modern eye, sculpture of the eleventh and twelfth centuries looks abstract, simplified and perhaps exaggerated.  In some cases, they seem delightfully cartoonish.  In fact the relatively refined appearance of our grotesque faces would seem more at home in Gothic sculpture.

Photo on left by Sacred Destinations

The eclecticism of the late nineteenth and early twentieth centuries cheerfully allowed such apparent anachronisms.  The level of detail on foliate and interlace patterns does not seem much different, however, than period examples.

Shadyside Church is not alone among Richardsonian buildings in this respect.  Grotesques of similar styling appear on the designs of H. H. Richardson and his followers.  And, while these carvings may seem to have a Gothic origin, they are not to be confused with Gothic gargoyles, which, by their strictest definition, are used as water spouts. 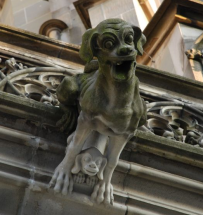 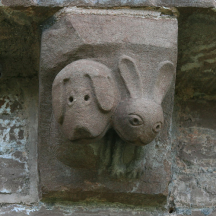 No pattern seems to emerge in the design or arrangement of Shadyside’s faces. Their expressions range from pensive to grim to…well, grotesque.